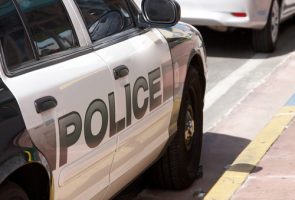 Atlanta, Georgia – Yesterday, a man attempted to rob customers and employees at the Waffle House restaurant in Atlanta.

Fox 5 reported that the man was seen in front of the restaurant walking back and forth in the parking lot.

The suspect was wearing all black clothes and a black hoodie to cover most of his head and parts of his face. After a while of pacing in the parking lot, the man opened the door and was seen going into the bathroom by everyone in the restaurant.

In the surveillance video, the man’s face is seen and he appears to be in his thirties or forties, according to Atlanta police.

After being in the bathroom for a while, the man came out wearing a scary and angry clown mask with a gun in his hand.

He “demanded wallets and phones” from the restaurant’s employees and customers.

He also demanded that one of the customers give him their car key.

Charles Fears reported to the police after the incident that the suspect got away with his car. He said, “I thought it was a joke… I was shocked, so I gave my car to him. I didn’t want to get shot.” He was scared and felt threatened so he chose to give up his car instead of his life.

Before the suspect left the restaurant, he took the cash register.

When he walked outside the Waffle House, one of the customers started to argue with him through the window, which upset and angered the suspect.

The suspect then shot the guy in the neck through the glass window and took off in Fears’ car.

The man that was shot “was alert, conscious and breathing,” according to Fox 5. He was immediately taken to a local hospital.

A few blocks away from the restaurant, the police department found Fears’ car. However, the suspect had left the location. Nothing was in the car. He had taken everything with him, including the cash register and his mask.

Nobody else was hurt or injured. The glass window was shattered when police arrived at the scene and the man that was shot is said to be in stable condition. Atlanta police remain to search for the suspect.

Native American Co-Founder of Georgia May Receive a Statue