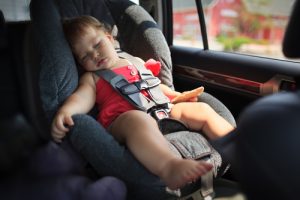 The hottest days are yet to come and so far, this year 18 children in the U.S. have died from being left in a hot car. Most of those deaths have happened in the southeast, one occurring in Georgia.

During the summer, normal routines can easily change when it comes to children and caregivers. The state hopes you don’t let a change in the routine end in tragedy.

It’s a public service announcement running now, reminding all caregivers to always “Look Again.” “‘Look Again’ is our annual campaign to remind anyone who cares for a child, whether that’s a parent, a babysitter, a grandparent, a childcare provider, of the dangers of leaving a child in a car…even for a minute,” explains Georgia Commissioner of Bright from the Start: Georgia Department of Early Care and Learning, Amy Jacobs.

With 90-degree temperatures the norm in Georgia,  in a matter of moments, things can turn deadly. “The inside of a car can reach deadly temperatures within about 10 minutes and when you combine that with a child’s body temperature that increases five times faster than adults, that is a deadly combination,” adds Commissioner Jacobs.

In Camden County, Georgia last month, a 7-month-old boy was found dead inside a hot car, near the Florida state line. It happened in the parking lot of the Quality Inn in Kingsland. The Sheriff’s Office has charged the child’s mother with involuntary manslaughter and cruelty to children.

Commissioner Jacobs says that they must, unfortunately, continue this campaign because they continue to see deaths of children and this is a death that can be prevented.

This year’s P.S.A. is geared more to families, who may be changing up routines throughout the summer. “Sometimes it is an accident and that’s why we want to remind folks, year after year… do whatever you can to set yourself a reminder especially when you have a change in your routine,” she added.

Also, if you happen to see something, experts say act fast. “If you see a child in a car and a parent is not around, do not hesitate to call 911. You could help save a life,” Commissioner Jacobs says.

Commissioner Jacobs encourages you to always lock your car, even if it’s only in your garage. That way your child can’t go looking for a toy and be accidentally trapped in the hot car.

Everything You Need to know to Ship a Classic Car