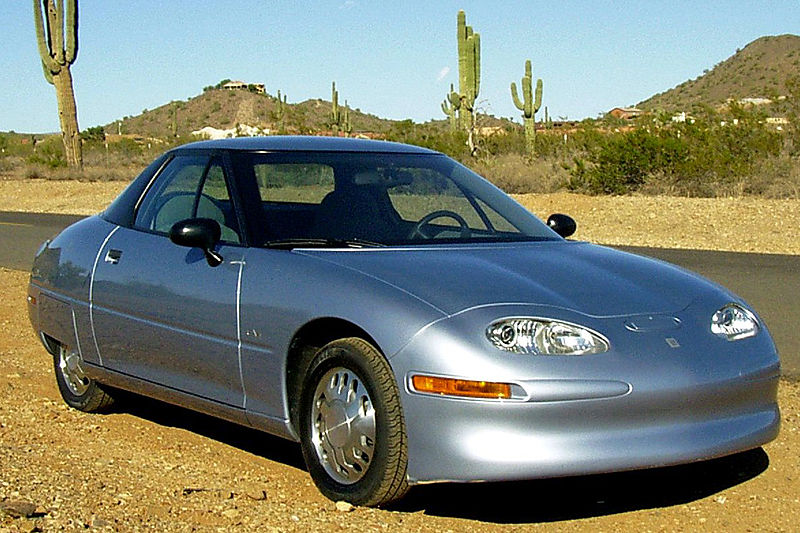 For most, the thought of General Motors’ endeavors into the electric world of cars might be scoffed at. They are, after all, one of the largest producers of gas-guzzling vehicles. But they have a long history of developing electric technology. In fact, they were one of the first companies to develop a consumer wide electric car.

The early 2000s were a drag for many people. Gas prices were skyrocketing and everyone who had purchased an SUV during the boom in the 90s was now taking a pretty large hit to their bank accounts. The movement to switch to alternative fuels had started to pique the interest in the eyes of consumers. At this point in time, many began to take their old VW Microbus or their old Mercesed 300 series diesel engines and began converting them for biofuel. At this same time, General Motors had decided to take the first initiative into the electric car industry.

EV-1 was America’s first mass-produced electric car. It was ugly. Extremely ugly. Unfortunately, most of the public saw it the same way. It was a great introduction to the electric car market, but the timing was off and producing a vehicle like that showed that, yes, a car could run completely on electricity, but the energy output, charging requirements and distance per charge did not meet the demands of public interests. But, it was cool to see the first fully electric car hit the market.

The Next 20-years of Electric Advancement

In 2008 many automotive companies were bailed out due to the Obama administration. When GM got their hands on money, the initiative to refocus their efforts into electric vehicles was a priority. From then on, GM had developed increasingly more effective technologies to reemerge as one of the leading vehicle brands in electric.

Japanese automakers were also keen on introducing technology into the automobile market. With the invention of the hybrid engine, both traditional gasoline, as well as electricity, would work together to optimize fuel performance. With Toyota’s release of the Prius, it gave consumers what they were looking for in terms of power and performance. Saving money at the pump was and still is a big deal and cars like the Prius acted as a catalyst for what we have today.

By 2015, Tesla had already achieved their goal of pushing the electric standard way past what had been originally thought. From there, the tech and auto industry boomed. Tesla model cars were seen more frequently in places like California Arizona, and New Mexico. The electric industry had been fully established and allowed drivers many more available options than what GM had done more than a decade earlier.

While both of these events were crucial to establishing a fuel-less vehicle industry, GM was in the shadows. While they were tucked away, they developed newer and more effective batteries, charging stations and power performance.

During this year’s Super Bowl, many were shocked to see GM had developed an electric car. In fact, many were shocked to see that it was the HUMMER of all things. The HUMMER H- series had been purchased by GM with the intent to distribute both a consumer vehicle and a military vehicle for the US. This was at the near height of the fuel boom that many were moving away from. Again, the timing was everything and the company was too late to the power game.

With the electric truck market still fresh, GM decided to showcase its new powerful electric vehicles. The HUMMER EV isn’t exactly a Hummer, but a pickup truck. A monstrous one at that. Where Tesla had developed their goofy looking “Cybertruck”, GM was developing more traditional electric trucks. The shoe had moved to the other foot. Tesla was developing crazy looking vehicles that nobody wanted (or even really asked for) and GM designed a vehicle that could outshine Tesla in every imaginable way.

GM Has An Entire Line of Electric Cars

While General Motors has established itself as one of the first EV makers in the world, many were pessimistic about their technological advancements. Unfortunately, those skeptics have been proven wrong. With GM’s battery design far exceeding that of Tesla, as well as developing over 10 new models to be displayed this year, many have changed their perception of GM. The plans for the automotive giant have electric cars in the works for Chevy Cadillac and Hummer.

The DMV: A Terrible Place

The Fast And Furious Models In The Latest Trailer Look Sick!