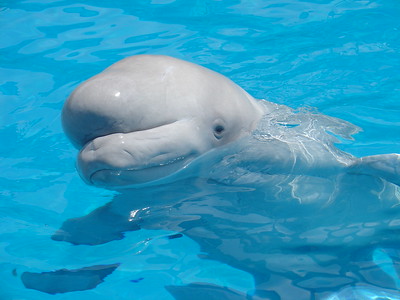 The Georgia Aquarium welcomed a new addition to their family last Sunday, May 17.  Whisper, the aquarium’s 20-year old beluga resident, finally gave birth to a healthy calf weighing 174 pounds and measured at 5 feet and 4 inches. Whisper’s labor was reportedly longer than average, but thanks to onsight medical teams and staff, it was a complete success.

The pair are together but are separate from the aquarium’s other belugas – Qinu, Maple, Nunavik, and Imaq. The staff is keeping a close eye on the new mother and her calf as they track key developmental milestones. This also gives the whales a chance to form their bond, which is important for aquatic mammals.

Whisper’s pregnancy was a major win for the aquarium and its ongoing research on biodiversity. The beluga whale population is classified as NT (near threatened) by the International Union for Conservation of Nature. Heavy pollution in their environments has taken a serious toll on natural populations due to belugas being at the top of the food chain. As the beluga is an apex predator, this has its consequences. The exposure to more highly-contaminated prey as well as direct exposure to harmful chemicals it hurting the animals. Though the aquarium is closed due to the COVID-19 pandemic, you can still view live streams.

Live streaming aquarium activities have become popular and a great way to educate children while the country is still under stay-at-home. It allows children who are at home from school to continue their education and grow. The new beluga whale will help further the aquarium’s goal of educating the future.

The whales and their other animals are available for viewing on the Georgia Aquarium website. Curious aquarium goers who want to know more about how the calf is developing can still get updates directly from the aquarium’s Facebook, Twitter, and Instagram.