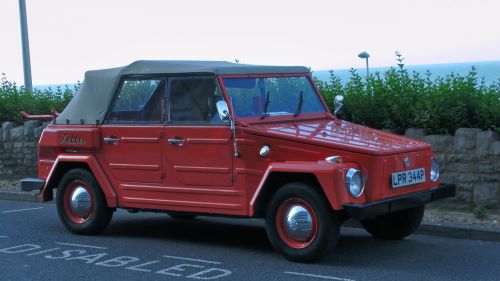 The Volkswagen 181 was a monstrosity from the German car company. In 1973 post-military vehicles were on the rise. With the advent of the Jeep during World War 2, many automotive manufacturers tried their hand at creating an all-terrain vehicle. The 181 was cool but didn’t live up.

The Volkswagen 181 is Born

During the Cold War, Germany was split into different sections. The West German side maintained the economic growth that its Eastern side lacked. The automotive competition was still a major player for the split country, and Germany’s motivation to develop a car for all-terrain purposes for military personal. Its original name was the Europa Jeep. The Volkswagen 181 sat on the Beetle’s chassis and was a beast.

The Thing had removable doors that could interchange, and the interior featured vinyl seats. The roof could be removed for top-down driving and the floor was a solid piece of sheet metal contained drainage holes and perforated rubber mats. The Thing was a tiny beast.

It was as bare-bones. It featured rear-wheel drive capabilities, provided excellent ground clearance an auto-locking rear-differential and literally nothing else. Aside from seat-belts, safety features didn’t exist. The engine was a four-banger that pumped out a whopping 55 horse-power. In traditional Volkswagen fashion, the engine was in the back.

Volkswagen 181 Release in The US

The 181 sold in the US between 1973-1974. Its selling name was “The Thing”. The concept did not bode well with the US market. Specifically, the safety features did not catch the eye of a stricter, more enforced auto industry. Thus, the United States was not partial to the car. Originally developed for the military, the US classified it as a consumer vehicle. This reclassification meant that a lot of the lacking safety features needed to change. Major features that made the Volkswagen 181 had to change in order to sell as a consumer vehicle.

There isn’t much to say in regards to a vehicle that has to change 60% of its features just to sell. It ran in the US between 73-74. After a time, its predecessor was Volkswagen 183 better known as the “Iltis”. The 183 held to the standards of modern vehicle safety features and provided a significantly higher mode of travel.

Like all classic cars, there is an emerging market for weird and wacky automobiles. The Thing is no stranger to collectors and you can find many refurbished models for sale in the US!

Chevy Tahoe Takes Your Breath Away With Latest Incarnation

What to do if You are NOT Watching the Superbowl